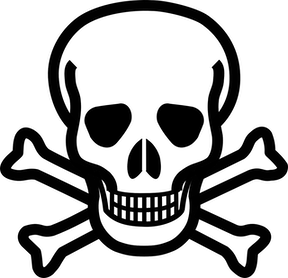 In response to PVC’s toxic threats, governments and corporations all around the world have passed policies to phase out PVC and switch to safer, healthier PVC-free products.

We explain below the implications of PVC and its adverse effect on both human and environmental health. Despite the overwhelming evidence, vinyl (PVC) disposable gloves are surprisingly still the most commonly used disposable food service glove in the US food industry.

Up to 50% of disposable vinyl gloves are made up of plasticizers, which make the PVC flexible and soft enough to wear. Often plasticizers contain phthalates and BPA as they are inexpensive.

Phthalate plasticizers can be absorbed through worker’s skin and quickly transfer to, and contaminate food products. Adverse health effects from exposure to BPA and phthalates in US food and occupational settings is estimated to result in $175 billion in healthcare costs**, read more about this here.

Due to the molecular structure of vinyl disposable gloves, there are associated risks that limit their performance and affect barrier protection. Studies have highlighted the lack of cross-linking of PVC molecules, causing them to separate when flexed or stretched. The effect of this is two fold:

A proper accounting of the human health impacts of PVC across its lifecycle, including disposal issues and occupational exposure, finds that PVC leads to the release of dangerous quantities of dioxin and other carcinogens. The report authors found that, "When we add end of life with accidental landfill fires and backyard burning, the additional risk of dioxin emissions puts PVC consistently among the worst materials for human health impacts..."

In reaction to both the health and environmental threats of PVC, below are some of the changes to be adopted by governments and companies around the world to switch to safer, healthier PVC-free products.


Despite all the evidence against the use of vinyl disposable gloves, why are vinyl gloves still the predominant food handling glove used in the US?  Simply, due to cost - potentially at the expense of health to the glove wearer, the consumer, and the environment.

Ironically, innovative disposable supply companies such as Eagle Protect PBC a certified B Corporation and Public Benefit Corporation have products and processes that can keep PVC out of the food industry for little or no added cost!

** Full details and references for all the information included here are taken from the Glove Hazard Analysis & Mitigation Strategies Research Study conducted by Barry Michaels. Contact us for more information.